Responsible Travel Policy
Download our new 2022-2023 brochure here ..
'Fez Travel '
OR
Email us for a hardcopy of our brochure brochure@feztravel.com

Did you know?
The Smallpox vaccination was introduced to England and Europe from Turkey by Lady Montague in the early 19th century (after Turkish physicians saved her son’s life).
Latest information on Coronavirus (COVID-19) ...here

"Great tour. Had a guide that new everything there was to know about Ancient Turkey. He also looked identical to Jerramy Clarkson. It was a small group tour and were we surprised about the quality of the hotels we stayed in! Beautiful. All meals were buffay and included in the price. If you are looking to party this is not the tour for you. However if you love history and want to see different ages of Turkey then its for you. Thanks for everything I will never forget my time in Turkey."
MIRIAM F (Viator) Rated 5 out of 5. Reviewed 28-May-15

This 8 day tour, starts and ends in Istanbul, Turkey.

Welcome to Istanbul. After picking you up from the airport, we'll drop you off at your hotel for a free day in Istanbul to explore the city.

Visit the Topkapi Palace (including Hagia Irene), Blue Mosque, St Sophia Museum, and Hippodrome in this exotic city that spans both Europe and Asia. In the afternoon, cruise between two continents on the stretch of water that separates Europe and Asia with an optional 'Half day Bosphorus cruise.'

After breakfast, we travel to Ankara, the country's capital, to see Anitkabir, Mustafa Ataturk's Mausoleum, before continuing on to Cappadocia's bizarre environment.

Today, we'll visit the Goreme Valley Open Air Museum and the fairy chimneys, as well as tour the numerous levels of an underground city, to marvel at Cappadocia's lunar scenery. Have your cameras ready because photo possibilities abound! Don't miss the optional Turkish folklore event featuring folklore and belly dancers tonight... it'll be a night to remember!

We're going to Pigeon Valley and then Red Valley this morning, then Cavusin, and finally Avanos town, where we learn about hand-made pottery.

We leave Cappadocia in the morning and cross the Tekir plateau on our way to Adiyaman and Mt Nemrut. The Seljuk Karatay Caravansaray will be our first stop along the route. Following that, we'll stop in Pinarbasi for a quick tea break before we go on to the old Severus (Cendere) Bridge and the Karakus Tumulus, where members of the royal family were buried, after passing through Adiyaman and visiting Arsemia, the former capital of the Commagene Kingdom. We'll head to Mt Nemrut this evening, climb the mountain, see the spectacular sunrise across the plateau, and see the gigantic old rock statues.

Today we drive to Sanliurfa, stopping along the way to see Turkey's largest dam, the Ataturk Dam. After a short rest, we drive to Gobekli Tepe, which is thought to be the world's oldest temple and predates Stonehenge by 6,000 years. We then travel to Harran, a community of mud-brick "beehive" homes recorded in Genesis as the location where Abraham spent his final years. We will explore the ruins of Harran, which include the city walls, the oldest Islamic university, and an eighteenth-century castle. In Sanliurfa, where you will have the opportunity to visit Mevlid-i Halil Mosque, where you will be able to explore the Prophet Abraham Cave and the Pools of the Holy Carp that surround it, as well as meander about the oriental covered bazaar.

Depart Sanliurfa for Gaziantep, where you may see the world's largest mosaic museum, which houses the iconic 'Gypsy Girl' mosaic. The magnificent mosaics unearthed at the Roman site of Belkis - Zeugma, before the Birecik Dam inundated most of the site, are on display at this museum. Then we travel to Hatay province, where we see the incredible Roman Titus tunnel. Hatay is a city with a fascinating past. The Hellenistic, Roman, Byzantine, and Ottoman empires all left their imprint here, as have Jews, Christians, and Muslims. Antakya, or biblical Antioch, Hatay's capital, offers an appealing lifestyle with its restaurants, cafes, and bars, as well as a culinary culture that draws gourmets from all over the world. A flight to Istanbul is included. The tour has come to an end at Istanbul Airport.

Please Note :
1. Group Size : Minimum Group Size of 2. Maximum Group Size of 20.
2. Age : Minimum Age of 8. Whilst there is no Maximum Age set it is assumed the customer is fit enough to take part in the activity or tour. Health documents may be requested.
3. Single travellers are obliged to pay Single Supplement and will have the hotel room to themselves.
4. Domestic flight times may vary due to various circumstances
5. You will need to have your passport handy at check-in for any domestic flights

Tour includes :-
Tour does not include :-

This is intended to give an idea of the type of accommodation that may be expected. The actual hotels used for any given tour may change due to many reasons such as group size, availability, time of year, hotel standard has dropped or simply we found a better hotel. We update the website immediately if and when any changes take place. If and when we do change hotels it will be to a hotel of equal or higher standard and will be at no extra cost.

Where more than one hotel is shown for a given an overnight stop this means that one of those hotels will be used. 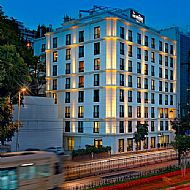 Prices
per person in twin share accommodation
From
To
Currency:- USD
Cost
S.S.